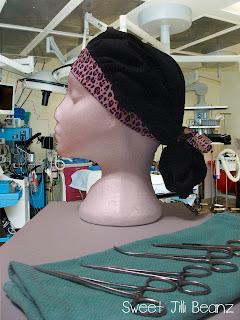 Give your favorite scrub tech / OR nurse / food service worker / anyone else who wears a scrub hat, some love and make them their own scrub hat!

Here are instructions on how to make a scrub hat for someone who has medium to long hair.  If you leave off the ties, it can be used by someone who doesn't need to hold their hair back.

The first time I made one of these, I started off by making a pattern out of interfacing.

Supplies:  Lightweight fabric--try to avoid heavy fabrics because they will be hot, 1/4" elastic (I sew the elastic inside the band and adjust it later, so I cut a piece the length of the back band, or a little smaller and stretch it as I sew) 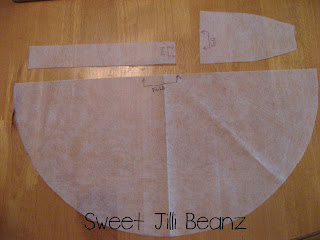 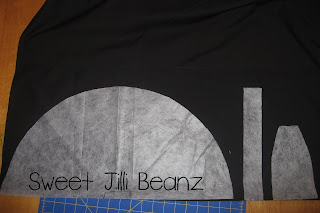 I made my pattern for the circle as a half-circle, but you can also make it a quarter circle by folding the fabric and marking an arc that is 10.5". 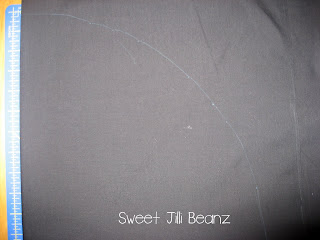 For this hat, the hat (circle) and back band are being done in black and the front band and ties are done in the pink patterned material. 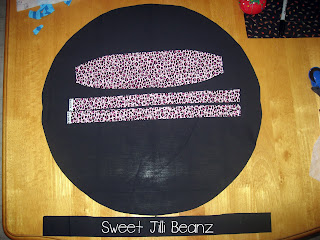 Fold the circle in half and place a pin at each side of the fold to mark them.  Fold in half the other direction to mark the other side. 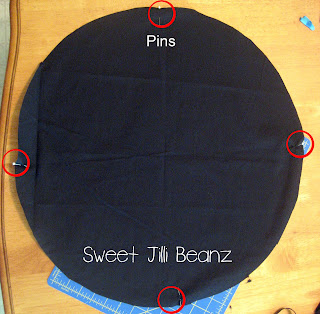 A shortcut to speed up the pleats is to use a credit card/gift card--use the magnetic strip as a guide for your fold.  For this hat, I listened to 3 songs on my iPod while I did the pleats--I was also texting--proof that it doesn't take that long.  Pleats used to scare me...not anymore! 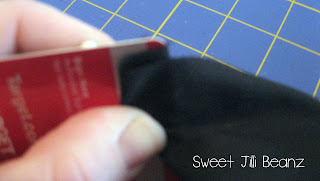 When doing the pleats, I did the left side one direction and the right side the other direction. 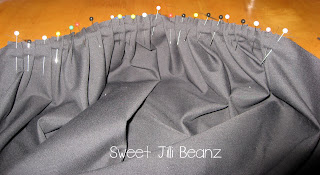 Rotate the hat and add pleats starting at the pin at the bottom--put 3-4 pleats on each side.  You can add 1 or 2 more on each side if needed.  Make sure you are still working on the same side of the fabric as you did when you put the top pleats in (outside of hat vs. inside of hat).
Stitch the pleats down (close to the edge) so you can remove the pins.

Fold the back band in half and iron.  Find the center of the strip and put a buttonhole on one side (this will be used to adjust the elastic in the back).

I used a bias tape maker to make the ties and then I folded one end to finish it, and stitched the ties closed. 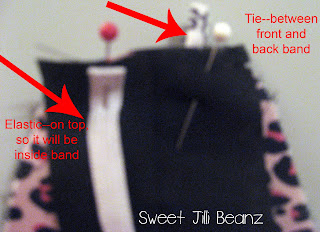 Fold the front band in half the long way and press down.  Fold band in half the other direction to find the center and match that to the center pleat on the front of the hat--pin in place.  Pin the rest of the front band to the had.  Match up the buttonhole on the back band (it should be in the center) to the center pleat and pin.  Pin the rest of the back band to the hat.  If necessary, add another pleat on each side or take out one of the pleats on each side so the band matches the circumference of the hat. 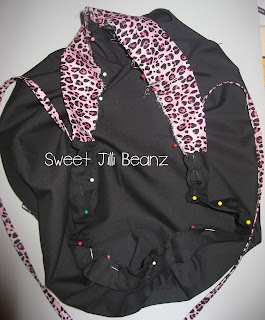 Sew the band to the hat and then either zig-zag or serge the edges.

Use the buttonhole on the back band to take the elastic out and adjust it so the hat fits the wearers head.  You can cut the elastic and sew it back together so it fits, or tie a knot in it (pull it tight so it stays) and tuck the knot back through the buttonhole.  (I make these and then have the wearer decide how tight they want the elastic--they wear them for long periods of time, so don't want them to be tight and uncomfortable).

This pattern is great for people with medium to long hair.  Once the person puts the hat on, they can cross the ties underneath their ponytail and then tie the ties around their ponytail to secure their hair.

If you have an embroidery machine, it would be cool to add the person's name to the front band. 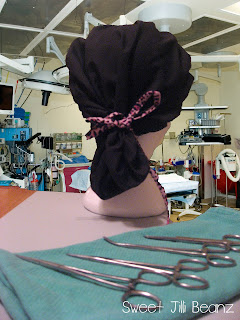 ...also participating in Get Your Craft On with Today's Creative Blog

Lana @ SweetJilliBeanz.com
Hi! I'm Lana, mom to a beautiful little girl named Jillian and wife to Kevin. I love to sew (especially baby/toddler clothes) and create things! Maybe one of these days I'll get around to making something for me!